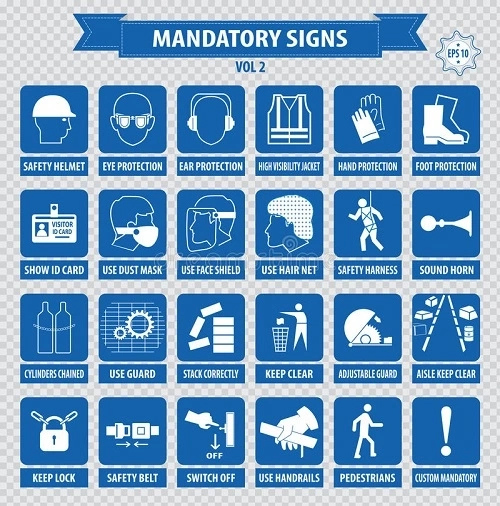 What Are Mandatory Signs

They are safety signs used to pass information on what is required in a particular area to stay safe, it is a subset of the regulatory signs.

This sign can be used in the workplace, domestic building, on the road, etc.

The picture below summarizes some very important mandatory signs:

Blue safety signs are mandatory signs that must be followed. These must always be blue and tend to have a white picture within a blue background. They tell the user what to do next and are used most commonly in the workplace. Standard mandatory safety signs notify employees to wear protective footwear, helmets or high-visibility jackets. These are most often found on construction sites. Some mandatory signs provide instructions, such as reporting to the site office.

Blue is not seen as a threatening colour, but does attract the eye. As mandatory signs have been blue since the law was set out in 1996, many people associate blue with instruction.

According to Wikipedia, Mandatory signs are a subset of the regulatory sign group as defined by the United Nations Economic and Social Council in the Vienna Convention on Road Signs and Signals of 1968, and are often seen not just on their own, but used in conjunction with other signs, traffic lights and bollards as a form of visual shorthand within these objects.

The mandatory sign group is not used in Australia, Ecuador, or the United States, none of which are signatories to the Vienna Convention. Canada has developed its own style using a green circle, which is not used in any other country. Below is a chart comparing some of the most common mandatory signs.

How To Identify The Mandatory Signs

We have highlighted some important mandatory signs with their meanings. So next time you step into a work premises, look out for these signs, it may be the only thing you need to guard your operations within the vicinity.

We have also given a clue on how to identify these signs – Remember, they always have a blue background.

These signs are obligatory on the traffic which uses a specific area of road. These signs indicate what must one do, rather than must not do. Mandatory Road signs are generally round in shape with red border. Some of them are blue in colour. ‘Stop’ and ‘Give Way’ are octagon and triangular, respectively, in shape. Violation of these signs attracts heavy fines and punishments. Importantly, violation of these could lead to major accidents also.

So, in as much as mandatory signs are expected to have two (2) major colours, White and Blue; some also have red in the mix. However, do not get confused, just understand the purpose of mandatory signs and you are good.

When To Use Mandatory signs

Mandatory signs spells out the actions or behaviours that are to be implemented within a workplace or area of public access to comply with relevant health and safety regulations. This actions and behaviours are Consider as ‘must do’.

Mandatory safety signs, or Blue safety signs as they are often commonly known, are recognizable by a white pictogram surrounded by a blue or red background as the case may be. These signs are to inform employees and visitors that actions must be taken to remain safe, this can include the need to utilize Personal Protective Equipment (PPE) or taking precautions to keep you safe in a potentially dangerous environment. They should be mounted in easily visible places for all to see clearly.