What Is Fire Alarm System: How It Works & Types 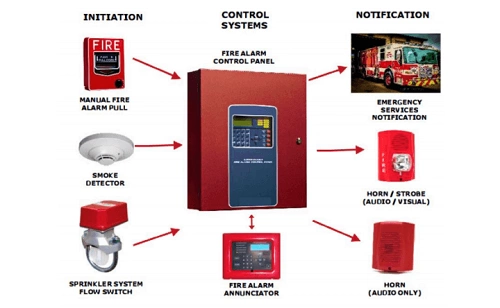 What Is Fire Alarm System

Fire alarm system is made up of a number of devices working together to detect and warn people of fire. These alarms may be activated automatically from smoke detectors, heat detectors or through manual fire alarm activation devices such as manual call points or pull stations.

The fire alarm system components include: The control panel – the system hub monitors inputs and system integrity, controls outputs and relays information. Primary power supply; supplied in the form of 124V or 240V AC from the power company.

The fire alarm system can be set off automatically by smoke detectors, heat detectors or manually. These sensors are programmed to detect certain levels of heat or smoke that could be an indication of fire.

Once a fire is discovered by this system, it tells the occupants of a building about the fire by making lots of noise and flashing lights.

Aside from notifying and warning occupants of fire, automated fire alarm system can also:

Read Also: 9 Fire prevention and fire fighting devices and how to buy them

There are basically two (2) types of fire alarm systems:

Regardless of the type of detector or alarm selected, the proper placement and maintenance of the device is crucial. Follow all manufacturers instructions for placement, testing and maintenance. The NFPA suggests battery replacement at least once a year on battery equipped units and a monthly detector test to verify the alarm function.

NOTE: Alarm installation and maintenance must always be done by a competent person.