P.A.S.S Fire Safety (How to Use Fire Extinguisher) 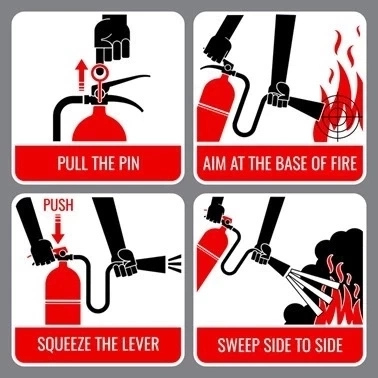 P.A.S.S fire safety technique is the simplest technique which can be adopted to extinguish fire at the infant level. In the event of a fire, it is crucial that you are aware of the correct procedures that you need to follow in order to ensure that the fire is put out.

NOTE: You can only try putting out the fire when you feel it is safe to do so, and there is a chance of stopping the fire.

There are a whole host of different fire extinguishers which can be used to tackle specific types of fires, and while it is important to select the right one, knowing how to use an extinguisher correctly is also vital.

NOTE: Do not touch the plastic discharge horn on CO2 extinguishers, it gets very cold and may damage skin.

According to OSHA, the most common emergency small businesses must plan for is a fire. Fire extinguishers can be invaluable tools to help fight smaller fires in the workplace or to protect evacuation routes in the event of a larger one.

Knowing how to operate the extinguisher is not the end of training. Employee responders to a fire also should be trained to adhere to the following protocol:

NOTE: Fire extinguisher is meant to combat small fire (Fire in the infant level). However, if any of the following conditions are present, workers should follow evacuation procedures immediately and should not attempt to fight the fire with an extinguisher:

The fire is too large: The fire involves flammable solvents, is partially hidden behind a wall or ceiling, cannot be reached from a standing position, or covers more than 60 square feet in area.

The air is unsafe to breathe: Levels of smoke make the fire impossible to fight without some form of respiratory protection.

The environment is too hot or smoky: Radiated heat is easily felt, making it hard to approach a fire within adequate range of using the extinguisher (about 10-15 feet). It is necessary to crawl on the floor to avoid heat or smoke. Visibility is poor.

Evacuation paths are impaired: The fire is not contained and heat, smoke or flames block potential evacuation routes.