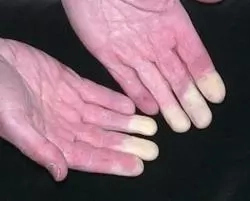 What is Vibration white finger

Vibration white finger is the name for a painful and potentially disabling condition of the fingers, hands, and arms due to vibration; it is also known as the hand-arm vibration syndrome. It is a secondary form of Raynaud’s syndrome, an industrial injury. It begins with initial tingling sensation in the fingers with numbness. The fingers then become white and swollen when cold and then red and painful when warmed up again.

Cold or wet weather may aggravate the condition. Picking up objects such as pins or nails becomes difficult as the feeling in the fingers diminishes and there is loss of strength and grip in the hands. The pain, tingling, and numbness in the arms, wrists and hands may interfere with sleep.

The term vibration-induced white finger (VWF), was introduced by the Industrial Injury Advisory Council in 1970. Injury can occur at frequencies between 5 and 2000 Hz but the greatest risk for fingers is between 50 and 300 Hz. The total risk exposure for hand and arm is calculated by the use of ISO 5349-1, which stipulates maximum damage between 8 and 16 Hz and a rapidly declining risk at higher frequencies. The ISO 5349-1 frequency risk assessment has been criticized as corresponding poorly to observational data; more recent research suggests that medium and high frequency vibrations also increase HAVS risk.

Vibration white finger may occur in those using handheld vibrating tools such as sanding tools, hammer drills, jackhammers and chain saws. It may also be caused by holding or working with machinery that vibrates. Vibration promotes vasoconstriction through arterial smooth muscle hypertrophy, and damage to the endothelial cell walls; there is an increase in the release of vasoconstricting chemicals such as serotonin and thromboxane. Nerve damage also occurs.

Excessive exposure to hand arm vibrations can result in various patterns of diseases casually known as HAVS or VWF. This can affect nerves, joints, muscles, blood vessels or connective tissues of the hand and forearm.

Read Also: What is an occupational injury

In extreme cases, the sufferer may lose fingers. The effects are cumulative. When symptoms first appear, they may disappear after a short time. If exposure to vibration continues over months or years, the symptoms can worsen and become permanent.

There are some specific features and symptoms of vibration white finger:

Who is at risk

This typically happens to people who regularly use certain types of vibrating tools, such as:

Generally, any vibrating tool that causes tingling or numbness in your fingers could lead to vibration white finger.

What are the early signs and symptoms to look out for

If you continue to use high-vibration tools these symptoms will probably get worse, for example:

Your description of symptoms and the fact that you have worked for a long time with vibrating tools may be enough to clinch the diagnosis of HAVS. However, tests are sometimes needed, especially if you are involved in a compensation claim. The tests may include checking your grip strength, your ability to perform fine hand movements and the response of your fingers to cold.

Read Also: What is the occupational health and safety act

However, standard tests used to diagnose vibration white finger include:

The Control of Vibration at Work Regulations 2005, created under the Health and Safety at Work etc. Act 1974. is the legislation in the UK that governs exposure to vibration and assists with preventing HAVS occurring.

Good practice in industrial health and safety management requires that worker vibration exposure is assessed in terms of acceleration, amplitude, and duration. Using a tool that vibrates slightly for a long time can be as damaging as using a heavily vibrating tool for a short time. The duration of use of the tool is measured as trigger time, the period when the worker actually has their finger on the trigger to make the tool run, and is typically quoted in hours per day. Vibration amplitude is quoted in metres per second squared, and is measured by an accelerometer on the tool or given by the manufacturer. Amplitudes can vary significantly with tool design, condition and style of use, even for the same type of tool.

In the United States, the National Institute for Occupational Safety and Health has publish a database where values for sound power and vibrations for commonly found tools from large commercial vendors in the United States were surveyed.

The effect of legislation in various countries on worker vibration limits has been to oblige equipment providers to develop better-designed, better-maintained tools, and for employers to train workers appropriately. It also drives tool designers to innovate to reduce vibration.

Use of anti-vibration gloves: Anti vibration gloves are traditionally made with a thick and soft palm material to insulate from the vibrations. The protection is highly dependent on frequency range; most gloves provide no protection in palm and wrist below ~50 Hz and in fingers below ~400 Hz. Factors such as high grip force, cold hands or vibration forces in shear direction can have a reducing effect and or increase damage to the hands and arms. Gloves do help to keep hands warm but to get the desired effect, the frequency output from the tool must match the properties of the vibration glove that is selected. Anti-vibration gloves in many cases amplify the vibrations at frequencies lower than those mentioned in the text above.

Reactive monitoring:  A simpler system, known as re-active monitoring, may be used by, for example, monitoring rates of usage of consumable items. Such a system was introduced by Carl West at a fabrication workshop in Rotherham, England. In this system, the vibration levels of the angle grinding tools in use was measured, as was the average life of a grinding disk. Thus by recording numbers of grinding disks used, vibration exposure may be calculated.

How do I protect myself?

As an employee, here are things you can do to protect yourself against the vibration white finger:

What else can I do?

What can be done to improve the vibration white finger

If a worker has developed vibration white finger, management may include:

What is injury; Classification & types of injuries

What is head on collision; causes and injuries associated with it

Domestic asbestos survey; Why you need it & How to choose...

Vacancy for a HSE superintendent in Papua, Indonesia