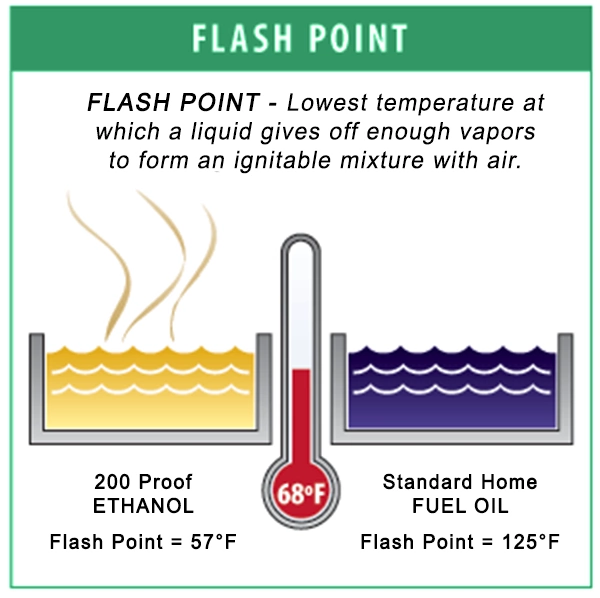 What is Flash point and flash point of some chemicals

This is the lowest temperature at which vapor of a volatile combustible substance can ignite in air in the presence of an ignitable source. At flash point, more vapor may not be produced rapidly enough to sustain combustion. Hence, the fire is mostly not sustained. At some temperature above the flash point, the liquid will produce enough vapour to support combustion. (This temperature is known as the fire point).

It is used to measure how volatile a liquid is and the level of risk it could pose. They are measured by heating a liquid to specific temperatures under controlled conditions and then applying a flame.

How it is measured

Open cup measurement: In open cup devices, the sample is contained in an open cup which is heated and, at intervals, a flame brought over the surface. The measured flash point will actually vary with the height of the flame above the liquid surface and, at sufficient height, the measured flash point temperature will coincide with the fire point. The best-known example is the Cleveland open cup (COC).

Closed cup measurement: There are two types of closed cup testers: Non-equilibrial, such as Pensky-Martens, where the vapours above the liquid are not in temperature equilibrium with the liquid, and equilibrial, such as Small Scale (commonly known as Setaflash), where the vapours are deemed to be in temperature equilibrium with the liquid. In both these types, the cups are sealed with a lid through which the ignition source can be introduced. Closed cup testers normally give lower values for the flash point than open cup (typically 5–10 °C or 9–18 °F lower) and are a better approximation to the temperature at which the vapour pressure reaches the lower flammable limit.

Generally, flash point is an empirical measurement rather than a fundamental physical parameter. The measured value will vary with equipment and test protocol variations, including temperature ramp rate (in automated testers), time allowed for the sample to equilibrate, sample volume and whether the sample is stirred.

The use of the flash point as a measure of a liquid’s hazardousness dates from the 19th century. Before gasoline became important, kerosene was the main petroleum product (used mainly as fuel for lamps and stoves), and there was a tendency on the part of petroleum distillers to leave as much as possible of the commercially worthless gasoline in the kerosene in order to sell more product. This adulteration of kerosene with highly volatile gasoline caused numerous fires and explosions in storage tanks and oil lamps. Legal measures were instituted to curb the danger, and test methods were prescribed and minimum flash points set.

Flash point of some substances

What is the difference between ignition temperature and fire point

20 Common fire hazards you should know