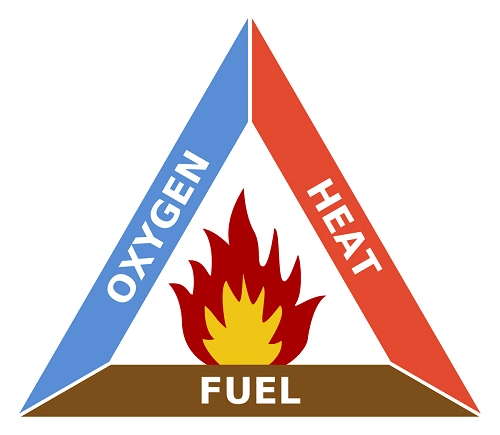 What Is Fire Triangle

The fire triangle or combustion triangle is a simple model for understanding the necessary ingredients for most fires.

The triangle illustrates the three elements a fire needs to ignite: heat, fuel, and an oxidizing agent (usually oxygen). A fire naturally occurs when the elements are present and combined in the right mixture. A fire can be prevented or extinguished by removing any one of the elements in the fire triangle. For example, covering a fire with a fire blanket blocks oxygen and can extinguish a fire. In large fires where firefighters are called in, decreasing the amount of oxygen is not usually an option because there is no effective way to make that happen in an extended area.

The fire triangle concept do not just help in understanding the basic elements for fire generation, it also guide in the process of fire extinguishing.

The three elements of the fire triangle are:

What Are Fire Hazards

Fire hazards are workplace hazards that either involve the presence of a flame, increase the probability that an uncontrolled fire will occur, or increase the severity of a fire should one occur.

It includes anything which impedes the function of fire protection material or equipment, as well as anything that inhibits fire safe behavior. For instance, an obstruction which impedes safe evacuation and a malfunctioning sprinkler system would both be considered fire hazards. This is because a facility’s level of risk factors in both the probability that a fire will occur and the severity of the potential harm that could be caused by a fire if it did occur.

Numerous OSHA standards are in place to address fire hazards. They include standards for hazard communication, safe storage, fire suppression systems, personal protective equipment, planning, training, and more. There are also specific hazard standards for industries such as construction, shipyard work, and mining. Beyond these standards, OHS authorities also rely heavily on the National Fire Protection Association (NFPA) when determining whether an employer’s fire safety efforts are adequate.

Some aspects of fire safety have been standardized internationally. For example, OSHA’s hazard communication standards draw upon the United Nations Globally Harmonized System for Classification and Labelling of Chemicals (GHS). The GHS system which ensures that workers only ever have to be able to recognize one symbol to understand whether or not a chemical is a fire hazard, regardless of the country that chemical is sourced from.

How The Fire Triangle Can Help In Fire Prevention And Extinguishing

When the three elements of the fire triangle are available and combine in the right mixture, fire must ensue. Also, if one of the elements is removes, fire is extinguished.

For instance if there is fire breakout and we need to extinguish it, we just need to remove one element of the fire triangle thus:

As soon as one component is removed, the fire cannot continue. This is the basic concept for fire prevention and extinguishing.

41 Safe driving tips you must apply while driving

How to carry out fire extinguisher inspection

What is fire risk assessment: How it is done

11 Common Fire Hazards In The Workplace