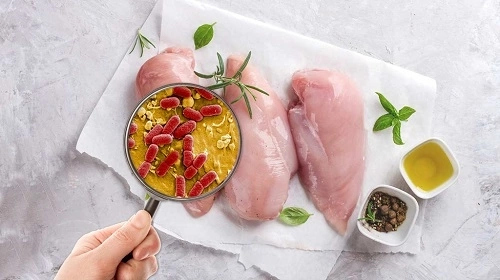 What Are Biological Hazards In Food

Here are 7 common examples of biological hazards in food that are not well known to the general public but can potentially cause serious illness or even death. Fortunately, these hazards can be prevented by following proper food handling and preparation techniques. These include consuming meat from animals that have not been treated with hormones or antibiotics, properly cooking foods to the recommended internal temperature to destroy harmful bacteria, and washing fruits and vegetables thoroughly before eating them. Be sure to read more here about each of these seven common types of biological hazards in food, as well as how to prevent them from harming you or your family.

Biohazards are also known as biological hazards, and they come in all shapes and sizes. They can be microscopic organisms such as viruses, bacteria, protozoa or fungi, or larger ones like insects or reptiles. Pathogens are the most dangerous type of biological hazard because they can lead to food poisoning, foodborne illnesses and diseases such as hepatitis A and salmonella.

Below are Examples Of Biological Hazards in Food;

Commonly mistaken for a foodborne illness, botulism actually affects your entire body. Symptoms like blurred vision and slurred speech result from muscle paralysis caused by bacteria called Clostridium botulinum. When ingested, C. botulinum causes symptoms within 12 to 36 hours of ingestion, but can be treated if caught early enough. Unfortunately, no vaccine is available against botulism at present time. To prevent such biological hazards in food industry, pay attention to food safety.

Though botulism is primarily a product of foodborne transmission, its environmental origin is still unclear. A likely explanation involves soil-dwelling anaerobic bacteria that produce spores that then get into water sources and food crops through contamination. It might be transmitted by contaminated water used for irrigation or other means. If you know how to prevent biological hazards in food industry it will help you a lot.

To prevent botulism, follow food safety regulations and cook food properly. Be wary about spoiled or improperly cooked foods that can transmit pathogens like clostridium botulinum bacteria. Store perishable food items in coolers with temperatures set between 38 and 45 degrees Fahrenheit to slow down microbial growth rates.

​Biological hazards in food exist in several forms. The most common biological hazard in food is Listeria monocytogenes. Although it’s commonly referred to as Listeria, it was actually named after Sir Joseph Lister. He was a Scottish surgeon and antiseptic pioneer whose work led to many advances in infection control and preventive medicine.

Listeria can be found in many different types of food. In fact, it is one of the most common biological hazards in food. It can be found on raw fruits and vegetables, unpasteurized milk and dairy products, processed meats, seafood and even baked goods. The good news is that there are ways to prevent biological hazards in food like Listeria. One way is to properly cook foods that may have been contaminated with Listeria.

These infections may be more common than you think. In fact, studies suggest that anywhere from 20 to 50 percent of Americans have been exposed to toxoplasmosis. The U.S. Centers for Disease Control and Prevention says that pregnant women are at a greater risk of contracting toxoplasmosis and recommends that they refrain from eating raw or undercooked meat during pregnancy.

The toxoplasma parasite can be found in raw or undercooked meat, unwashed fruits and vegetables, and contaminated water. It is also a common cause of foodborne illness. Symptoms of toxoplasmosis include fever, muscle aches, headache, chills and swollen lymph nodes. While symptoms are usually mild and resolve on their own within a few weeks, it is important to remember that toxoplasmosis can be especially dangerous for pregnant women because it can lead to birth defects.

According to The Centers for Disease Control and Prevention, there are an estimated 1.2 million cases of foodborne illness each year—with one in six people affected by a foodborne illness resulting in hospitalization, and approximately 380 deaths annually from those illnesses.

This high number can be attributed to eating contaminated foods or coming into contact with animals that may have carried these infections (such as zoonotic diseases). Some bacteria can be very dangerous; others, such as E. coli only cause minor problems like diarrhea or headaches if they aren’t treated quickly.

This bacterium is commonly found on raw meat and poultry, but can also be found on produce and even eggs. Cooking food thoroughly will kill off any bacteria that may be present, but if you are not careful with your food preparation or do not cook foods long enough, you could end up with a serious case of salmonellosis.

Bacteria are undoubtedly some of the most common biological hazards in food. Staphylococcus, for example, is a common bacteria that causes skin infections in people but can also be transmitted to food products and end up making people sick if they consume them. In fact, according to one study published in Food Microbiology, staphylococcal enterotoxin A (SEA) was found on 38 percent of fresh chicken breasts purchased from grocery stores—and it was completely resistant to heat treatment (cooking). The same study found that SEA was also present on 30 percent of turkey breasts.

Illness caused by Staphylococcus can be prevented by keeping food at a safe temperature, washing hands thoroughly before handling food, and avoiding cross-contamination.

Campylobacter is another common biological hazard found in food, a bacteria that can be found in raw milk and chicken. Common symptoms of infection include diarrhea, fever, and abdominal pain. Most cases resolve within five days without antibiotics, but some can develop into more serious issues if left untreated.

A person with campylobacteriosis should drink plenty of fluids to prevent dehydration. It’s also important to wash your hands thoroughly after using the bathroom and before preparing food to avoid spreading bacteria to other people. In rare cases, campylobacteriosis can lead to Guillain-Barré syndrome, a condition that causes paralysis. If you think you have campylobacteriosis, see a doctor right away. Most infections clear up on their own within five days without antibiotics; however, some can develop into more serious issues if left untreated (CDC).

To help prevent campylobacteriosis, be sure to cook chicken thoroughly before eating. The CDC recommends cooking chicken until its internal temperature reaches 165 degrees Fahrenheit. Also, avoid drinking unpasteurized milk and wash your hands thoroughly after using the bathroom to lower your risk of infection (CDC).

The last common biological hazards we will be talking about is a bacterium called Streptococcus. This microorganism is responsible for strep throat and other diseases, including scarlet fever, toxic shock syndrome and more. Even at low levels, it can cause throat infections. All raw food must be processed to eliminate bacteria such as S. aureus.

Streptococcus can be found in raw meat, poultry, seafood and eggs. It is also present on raw fruits and vegetables that have been contaminated by infected food handlers. The most common way to get infected with S. aureus is through contact with someone who has it or by touching an object that has come into contact with their body fluids (such as a door handle).

After eating, drinking or touching something that has come into contact with S. aureus, you may experience symptoms such as redness and irritation of your mouth, throat or eyes. It may also cause abdominal pain, nausea, vomiting and diarrhea. If you have eaten food that contains S. aureus, you should wash your hands thoroughly with soap and water to prevent spreading it to other people.

READ: 6 Major types of hazards you should know

The best way to avoid getting sick from bacteria like Streptococcus is to cook all raw food properly before consuming it.