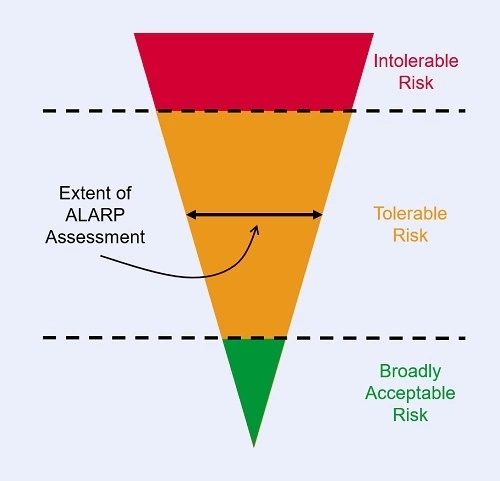 What is ALARP – ALARP is an acronym which means “As Low As Reasonably Practicable”.

It is also represented as ALARA – “As Low As Reasonably Achievable”, and

As SFAIRP – “So Far As is Reasonably Practicable”.

ALARP arises from UK legislation, particularly the Health and Safety at Work Act 1974. it has a wider use than ALARA which is used in USA and SFAIRP which is used both in UK and New Zealand.

These acronyms are used in connection with the management and regulation of safety systems and serve as in guide for risk management.

Making sure a risk has been reduced ALARP is about weighing the risk against the sacrifice needed to further reduce it. See ALARP guidance here

It must be possible to demonstrate that the cost involved in reducing the risk further would be grossly disproportionate to the benefit gained. This principle arises from the fact that infinite time, effort and money could be spent in the attempt of reducing a risk to zero.

Factors to be considered when deciding whether or not a risk has been reduced as far as reasonably practical:

The major limitation in this analysis is that risk and sacrifice are not usually measured in the same units, so it’s a bit like comparing two very different things; e.g, apples and pears.

The proposed solution to this limitation is to adopt the CBA (Cost Benefit Analysis). In CBA both risk and sacrifice are converted to a common set of units – MONEY, making it possible for them to be compared. 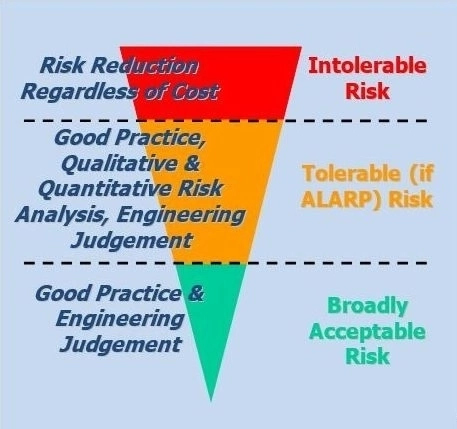 The region in-between the top and base is mostly recognized as the “as low as reasonably practicable region”.

This expression has been said to be misleading, since there is no legal requirement for risks to be tolerable, nor any recognition that low risks may be regarded as broadly acceptable.

However, to determine what is tolerable/acceptable, duty holders (Policy makers and those engaged in program delivery, Enforcers, and Technical specialists) must exercise judgement, referring to existing good practice that has been established by a process of discussion with stakeholders to achieve a consensus about what is ALARP.

What is R.A.C.E Fire Safety? (Check Out)