What Is Acid Rain | Causes & Effects 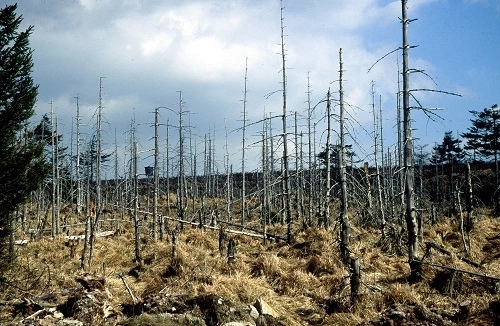 What Is Acid Rain

Acid rain is a rain that is unusually acidic; having an elevated levels of hydrogen ions (low pH), generally cause by emissions of sulfur dioxide and nitrogen oxide, which react with the water molecules in the atmosphere to produce acids. It is a broad term that includes any form of precipitation with acidic components, such as sulfuric or nitric acid that fall to the ground from the atmosphere in wet or dry forms.  This can include rain, snow, fog, hail or even dust that is acidic which can have harmful effects on plants, aquatic animals and infrastructure.

It results when sulfur dioxide (SO2) and nitrogen oxides (NOX) are emitted into the atmosphere and transported by wind and air currents. The SO2 and NOX react with water, oxygen and other chemicals to form sulfuric and nitric acids.  These then mix with water and other materials before falling to the ground.

While a small portion of the SO2 and NOX that cause acid rain is from natural sources such as volcanoes (Natural event), most of it comes from the burning of fossil fuels (Man action).  The major sources of SO2 and NOX in the atmosphere are:

Winds can blow SO2 and NOX over long distances and across borders making acid rain a problem for everyone and not just those who live close to these sources.

Its precursors result from both natural sources, such as volcanoes and decaying vegetation; and man-made sources, primarily emissions of sulfur dioxide (SO2) and nitrogen oxides (NOx) resulting from fossil fuel combustion. The burning of fossil fuels (coal and oil) by power-production companies and industries releases sulfur into the air that combines with oxygen to form sulfur dioxide (SO2). Exhausts from cars cause the formation of nitrogen oxides in the air. From these gases, airborne sulfuric acid (H2SO4) and nitric acid (HNO3) can be formed and be dissolved in the water vapor in the air.

Although acid-rain gases may originate in urban areas, they are often carried for hundreds of miles in the atmosphere by winds into rural areas. That is why forests and lakes in the countryside can be harmed by acid rain that originates in cities.

Acid rain affects plants, soil, trees, buildings and even statues can be transformed by the precipitation. It has been found to be very hard on trees because it weakens them by washing away the protective film on leaves and stunts its growth. A paper released in the online version of the journal of Environmental Science and Technology in 2005, showed evidence of acid rain stunting tree growth.

Acid rain can also change the composition of soil and bodies of water, making them uninhabitable for local animals and plants. For example, healthy lakes have a pH of 6.5 or higher. As acid rain raises the level of acidity, fish tend to die off. Most fish species can’t survive a water pH of below 5. When the pH becomes a 4, the lake is considered dead, according to National Atmospheric Deposition Program. It can also deteriorate limestone and marble buildings and monuments, like gravestones.

Effect on surface waters and aquatic animals: Not all fish, shellfish, or the insects that they eat can tolerate the same amount of acid; for example, frogs can tolerate water that is more acidic (i.e., has a lower pH) than trout. Both the lower pH and higher aluminium concentrations in surface water that occur as a result of acid rain can cause damage to fish and other aquatic animals. At pH lower than 5 most fish eggs will not hatch and lower pH can kill adult fish.

Effect on soil: Soil biology and chemistry can be seriously damaged by acid rain. Some microbes are unable to tolerate changes to low pH and are killed. The enzymes of these microbes are denatured by the acid.

Also The acid deposits rob the soil of essential nutrients such as calcium and cause aluminum to be released in the soil, which makes it hard for trees to take up water.

Effect on forests and other vegetation: Acid rain can have severe effects on vegetation. Adverse effects may be indirectly related to acid rain, like the acid’s effects on soil or high concentration of gaseous precursors to acid rain. High altitude forests are especially vulnerable as they are often surrounded by clouds and fog which are more acidic than rain.

The effects of acid rain, combined with other environmental stressors, leave trees and plants less healthy, more vulnerable to cold temperatures, insects, and disease. The pollutants may also inhibit trees’ ability to reproduce.

Effect on human health: Acid rain does not directly affect human health. The acid in the rainwater is too dilute to have direct adverse effects. However, particulates responsible for acid rain (sulfur dioxide and nitrogen oxides) do have an adverse effect. Increased amounts of fine particulate matter in the air contribute to heart and lung problems including asthma and bronchitis.

Acidity and alkalinity are measured using a pH scale for which 7.0 is neutral. The lower a substance’s pH (less than 7), the more acidic it is; the higher a substance’s pH (greater than 7), the more alkaline it is. Normal rain has a pH of about 5.6; it is slightly acidic because carbon dioxide (CO2) dissolves into it forming weak carbonic acid.  Acid rain usually has a pH between 4.2 and 4.4.

Policymakers, research scientists, ecologists, and modelers rely on the National Atmospheric Deposition Program’s (NADP) National Trends Network (NTN) for measurements of wet deposition. The NADP/NTN collects acid rain at more than 250 monitoring sites throughout the US, Canada, Alaska, Hawaii and the US Virgin Islands. Unlike wet deposition, dry deposition is difficult and expensive to measure. Dry deposition estimates for nitrogen and sulfur pollutants are provided by the Clean Air Status and Trends Network (CASTNET). Air concentrations are measured by CASTNET at more than 90 locations.

When acid deposition is washed into lakes and streams, it can cause some to turn acidic. The Long-Term Monitoring (LTM) Network measures and monitors surface water chemistry at over 280 sites to provide valuable information on aquatic ecosystem health and how water bodies respond to changes in acid-causing emissions and acid deposition.

Environmental Health (Everything you need to know)

What are natural hazards? Categories & Types

Environmental hygiene; All you should know