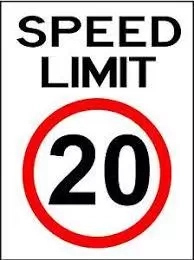 The new speed limited was imposed and introduced on 2 March, on all TFL roads within the Congestion Charging Zone (CCZ).

In addition to increasing safety, Mayor of London, Sadiq Khan also aims to encourage more people to walk and cycle in London by decreasing the speed limit.

Strong public support was given for the proposals, and the new speed limit was imposed on these roads:

However, some critics believe the 20mph limit would make no difference, as traffic already moves slowly in those areas.

New signage and road markings with raised pedestrian crossings are also being installed in locations where a high number of people walk, including near the Embankment and Tower Hill Tube stations, TfL said.

Steve McNamara from the Licensed Taxi Drivers Association critiqued the new law and said the limit would make little difference.

He said: “Most people would love to go as fast as 20mph in the middle of London,” he said.

“Average traffic speeds are 6mph in the centre. I can’t think of anywhere in central London it would make any difference at all, at least in the daytime. Those roads are all at a virtual standstill.”

Mayor of London Sadiq Khan said: “I am determined to do everything I can to eradicate all deaths and serious injuries on London’s roads and these new measures are a vital step along the way to helping us to achieve this.”

What is Side impact collision; Causes & its effects on the body

Domestic asbestos survey; Why you need it & How to choose...

Vacancy for a HSE superintendent in Papua, Indonesia