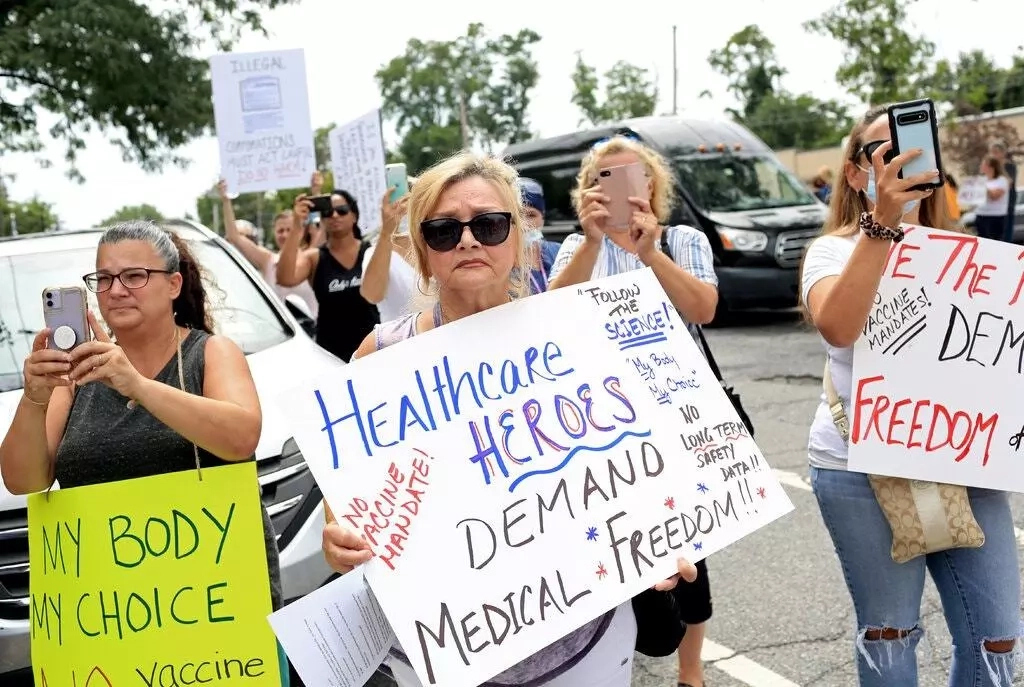 Deborah Conrad, a physician assistant in western New York, and Simmone Leslie, a hospital switchboard operator in Queens, have both worked long, risky hours during the pandemic. But now, both are prepared to lose their jobs rather than meet Monday’s state deadline for health care workers to get vaccinated.

In defying the order, they are resisting a step that public-health experts say is critical to save lives and end the pandemic. While they each cite differing reasons for their decisions — Ms. Leslie said her employer rejected her request for a medical exemption; Ms. Conrad referenced vaccine side effects she claimed to have seen but that veer from the scientific consensus — their recalcitrance embodies a conundrum facing New York.

Experts have called the mandate a clear-cut way for health care workers to prevent new waves of the virus from spreading, and to persuade doubters to get vaccinated. And health systems say the plan is crucial to keeping patients and staff safe.

Westchester Medical Center Health Network, where 94 percent of the systems’s 12,000 workers are vaccinated, called the mandate “a critical part of upholding our mission,” in a statement on Sunday.

But a vocal minority working within the health care system are themselves skeptics — and some, like Ms. Conrad, have imperiled the plan, even fighting the mandate in court.

They see their work as a badge of credibility, and the order from their bosses and the state to make a choice — get vaccinated or get fired — as a betrayal.

“We were all traumatized, vaccinated and unvaccinated,” said Ms. Conrad, who works at United Memorial, a hospital in Batavia, a small city midway between Rochester and Buffalo, and felt respected by colleagues there. “It’s very hard that the same people who elevated me to this level now look at me as a dangerous person.”

The dispute is dividing hospitals, where most workers are vaccinated and want their colleagues to be. The nurses’ union supports the mandate — some 95 percent of members are already vaccinated — even as some members complain its rollout was too rushed. But unions representing support workers, including nurses’ aides, orderlies, cafeteria workers and others, have opposed it. If many of those workers leave or are fired, their duties could fall to already taxed nurses.

The disagreement is also testing government’s power to mandate compliance with public-health measures; New York’s mandate and the state’s refusal to allow religious exemptions are the subject of at least two lawsuits, including one by Ms. Conrad and five other plaintiffs.

Still, staff members choosing to exit their jobs because of the mandate could also create immediate practical challenges: Many nurses and other health workers are burned out or traumatized from the pandemic’s strain; others have been lured by high salaries to become “travel nurses,” crisscrossing the country to fill emergency staffing gaps.

On Sunday at the Christian Cultural Center in Brooklyn, Gov. Kathy Hochul pushed back hard against the idea of religious exemptions to vaccination, urging worshipers to be “apostles” for the vaccine in order to “keep more people alive.”

“God did answer our prayers,” she told the congregation. “He made the smartest men and women — the scientists, the doctors, the researchers — he made them come up with a vaccine. That is from God to us and we must say, ‘Thank you, God, thank you!’”

“There are a lot of people out there who aren’t listening to God and what God wants,” she said as a gold necklace spelling “Vaxed” glinted from her chest.

A federal judge last week gave a reprieve to 17 health care workers, including doctors, nurses, therapists and medical residents who sued the state, extending a temporary restraining order for enforcing the mandate against them until Oct. 12. Their lawyer, Stephen Crampton, said the delay should apply to all health workers, but the state does not agree.