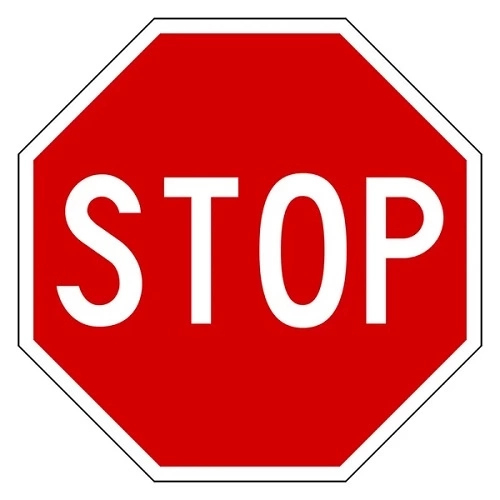 A stop sign is a regulatory traffic sign designed to notify drivers that they must come to a complete stop and make sure the intersection is safely clear of vehicles and pedestrians before continuing past the sign.

Its shape is octagonal with red letters on a white background, but it can also be yellow with black letters for increased visibility. There are many different kinds of stop signs depending on where they’re placed and what their purpose is.

Read Also: 41 Safe driving tips you must apply while driving

Generally they are placed to prevent crashes where there might be a question about who should have the right of way. When considering its placement, how a stop sign effects the overall safety and needs of the community is closely examined. For example, stop signs in one location could effect traffic on nearby streets. Drivers may seek new routes to avoid stop signs, which can lead to new traffic problems in adjacent neighborhoods.

Read Also: Right-of-way: When you must yield to it

It should be placed so that the sign roadside edge is at least 6-12 feet from the edge of pavement, with a 2 foot minimum for curbed roadways. Placement of the stop sign is to be on the right side of the roadway at either the stop line or (4) feet in advance of a crosswalk. If there is neither a stop line nor a crosswalk the sign should be placed where traffic can stop and clearly see both directions before entering the intersection, and no greater than 50 feet from the intersection.

Read Also: What is SPEED – How Do I Know Am Over-Speeding

Nytimes report this concernin the history and invention of this sign;

At a time when there were no driver’s licenses, speed limits or clear lane demarcations, the notion of a stop sign was revolutionary. In fact, aside from the occasional road markers letting riders on horseback know how far they were from the next city, there was no road or street signage at all. Eno, scion of a wealthy New England family who never learned to drive, helped change all that. In a 1900 article titled “Reforming Our Street Traffic Urgently Needed,” for Rider and Driver magazine, he proposed placing stop signs at intersections. It was a civilizing notion.“That was a new concept and really did introduce the idea that you had to watch out for other people,” Schank says.

It originated in Michigan in 1915.The first ones had black lettering on a white background and were 24 by 24 inches (61 cm × 61 cm), somewhat smaller than the current sign. Its became more widespread, a rural-dominated committee supported by the American Association of State Highway Officials (AASHO) met in 1922 to standardize them and selected the octagonal shape that has been used in the United States ever since. The unique eight-sided shape of the sign allows drivers facing the back of the sign to identify that oncoming drivers have a stop sign and prevent confusion with other traffic signs. It was also chosen so that it could be identified easily at night since the original signs were not reflective. The more urban-oriented National Conference on Street and Highway Safety (NCSHS) advocated a smaller red-on-yellow stop sign. These two organizations eventually merged to form the Joint Committee on Uniform Traffic Control Devices, which in 1935 published the first Manual on Uniform Traffic Control Devices for Streets and Highways (MUTCD) detailing the stop sign’s specifications.

The MUTCD’s specifications were altered eight times between 1935 and 1971. From 1924 to 1954, stop signs bore a red or black stop legend on a yellow field. Yellow was chosen because fade-resistant red materials were not available. Retro-reflective or self-lit signs were permitted in the 1935 MUTCD; retro-reflective ones were first required by the 1948 edition of the MUTCD, which also called for a 2+1/2-foot (0.76-metre) height from the road crown to the bottom of the stop sign. The 1954 MUTCD newly specified a white stop legend on a red field, and increased the mount height specification to 5 feet in rural areas. Red traffic lights signify stop, so the new specification unified red as a stop signal whether given by a sign or a light. The current mounting height of 7 ft (2.13 m) was first specified in 1971.

The account from Wikipedia begins around 1915 while the first account from Nytimes began in the 1900’s pointing to Eno, scion as the Man who conceived the idea of the stop sign. Based on this account, we can attribute this noble work to Eno, scion.

Are You A Truck Driver? Here Are Some Tips For Driving Safely

What Is Distracted Driving; Causes, Types & Ways To Reduce It