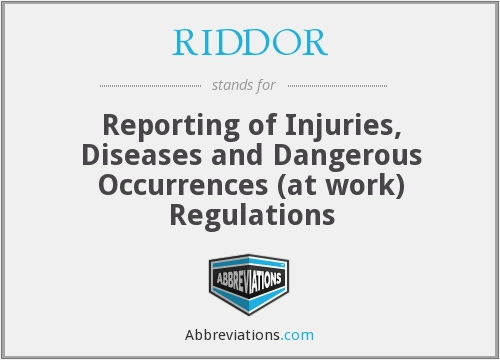 RIDDOR is the Reporting of Injuries, Diseases and Dangerous Occurrences Regulations 1995.  The regulations requires responsible persons to report deaths at work, major injuries caused by accidents at work, injuries to persons not at work that require hospital treatment and dangerous occurrences.

The aim of RIDDOR is to create a record of the number and type of incidents and illnesses in order to form a picture of risks involved in different industries and occupations, and to improve the investigation of serious accidents.

RIDDOR is a legal requirement to report incidents and ill-health at work. This will make it possible for incidents to be investigated and correcting measures implemented thereby preventing future reoccurrence.

RIDDOR sets out rules which should be followed by employers and anyone responsible for working premises in reporting workplace accident or work-related RIDDOR; it also covers near misses.

RIDDOR define major injuries to include:

See how to make a RIDDOR report here

How Often Should Health And Safety Policy Be Reviewed?

What Is The Occupational Health And Safety Act

What Is A Riser Room?