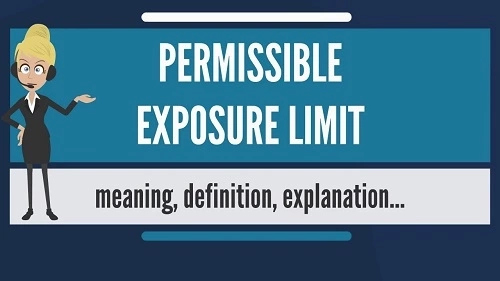 What Is Permissible Exposure Limit (PEL)

Permissible exposure limit (PEL) is a legal limit in the United States for exposure of an employee to a chemical substance or physical agent such as loud noise, vibration, etc. It is usually given as a time-weighted average (TWA).

Threshold Limit Value (TLV(R) ): Threshold limit value of a chemical substance establishes the reasonable level to which a worker may be repeatedly exposed, day after day, over a working lifetime without adverse health effects.

Time weighted average (TWA): Time weighted average is the average exposure to any chemical substance or physical condition (Vibration, Noise) in the workplace based on an eight-hour workday. This is the maximum amount of exposure where one may be exposed to without experiencing significant adverse health effects over said period. Once the TWA has been exceeded, the worker may not re-enter the space for the remainder of the day.

Short Term Exposure Limit (STEL) is a TLV(R) based on a 15 minute average, and should not be exceeded more than four times in a day as long as the time weighted average is not exceeded. If the predetermined limit has been exceeded, the worker must remove him- or herself from the hazard for at least one hour.

A Ceiling is a TLV that should not be exceeded during any part of the work experience.

Workplace industrial hygiene survey should be conducted in all facilities to determine the potential for exposure(s) in excess of established exposure levels such as the Permissible exposure limit and Threshold limit values. This survey must include job tasks and the potential created for the exposure by these tasks over all operational shifts as well as the potential for increased exposure(s) as a result of production/work demands. The industrial hygiene survey will allow the employer to establish which shift(s), process(es), etc, need to be sampled in order to acquire a representative sampling of employee exposure. Good industrial hygiene practice dictates that significant changes in the work process would call for additional personal air monitoring thus acquiring revised data which will be representative of employee exposure(s).

When working with materials that have an established Permissible exposure limit or Time weighted average, administrative and engineering controls should be used to minimize the generation of a the hazard in the first place. If these controls are not sufficient, appropriate personal protective equipment (PPE) such as gloves, dust masks, and respirators should be used to limit your exposure to the chemicals.

It is needful that we always do everything reasonable practicable to limit the airborne release of chemicals or dusts in the first place.

Why Are Health Cash Plans More Valuable Today Than Ever Before?

What Is The Appropriate Footwear In The Workplace

HAVS Exposure Limits: What Is It?