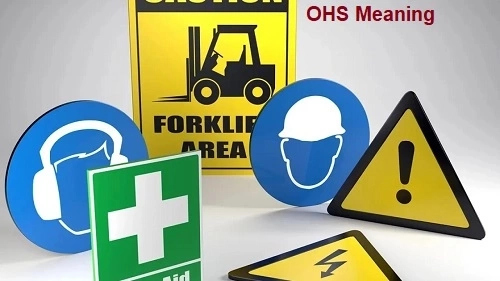 This is an acronym with full meaning – Occupational Health and Safety.

The OHS standards make it possible for workers to be able to carry out their responsibilities in a safe and secure working environment, free from hazards.

Occupational health and safety includes the laws, regulations, standards, and programs that are aimed at making the workplace better for workers, along with co-workers, family members, customers, and other stakeholders. It also ensure good business, a better brand image, and higher employee morale.

Occupational health and safety is concerned with addressing many types of workplace hazards, such like:

Occupational Health And Safety As A Discipline

History Of Occupational Health And Safety

READ: What Is Health, Safety and Environment (HSE)

READ: What Is The Difference Between HSE, EHS And SHE?

Importance Of Occupational Health And Safety

The Occupational Safety and Health Act

In December of 1970, President Richard Nixon signed the Occupational Safety and Health Act into law, becoming the first far-reaching federal law to protect American workers. Soon after, the Occupational Safety and Health Administration (OSHA) was established to ensure the proper and thorough implementation of the law. OSHA not only enforces occupational health and safety standards in United States, but continuously updates those standards in light of new research findings and best practices.