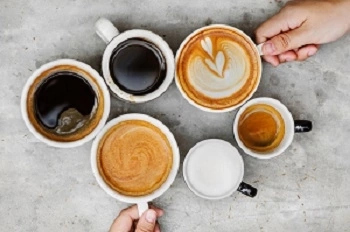 Health Benefits of Coffee – Coffee is an amazing beverage, which is why it is so popular with millions of people drink coffee worldwide. You can feel immediately refreshed after a cup of hot or cold coffee. This beverage is so popular that is estimated that more than 2 billion cups of coffee are drunk in a day globally. More than a billion people drink coffee daily worldwide.

If you love to have your coffee everyday as soon as you wake up in the morning, then here’s some good news for you. Studies indicate that coffee is good for health. It helps us in many different ways.

When you think of coffee, caffeine will probably be the first thing that will come to your mind. But it is not just caffeine in coffee. Nutritional experts at Johns Hopkins University School of Medicine suggest that coffee also contains antioxidants and several other substances, which can protect us against many diseases.

What are the health benefits of coffee? Health research indicates that there are quite a few. Let us take a look:

1. Coffee improves short-term memory. Caffeine affects the area of the brain that is responsible for concentration and memory. This improves memory in the short-term. Volunteers were served 100 mg of caffeine, which comes to about a cup.

Researchers in Austria discovered that the caffeine intake surged the brain activity. The subjects were asked to perform a memory task while the researchers analyzed how the brain reacted by carrying out FMRI or Functional Magnetic Resonance Imagery. Both the reaction time and memory skills showed a marked improvement. So, brain health and mental health can both improve by drinking coffee.

2. Coffee can protect us against cognitive decline. Study after study has indicated that coffee can improve memory and brain activity temporarily. Regularly drinking coffee may also prevent cognitive decline, which is linked with dementia and Alzheimer’s.

In a study carried out in Finland, the researchers discovered that 3-5 cups of coffee every day can reduce the risk of dementia and Alzheimer’s by as much as 65%. No association was found with drinking tea, It seems, caffeine may prevent beta-amyloid plaque buildup, which is responsible for the progression of Alzheimer’s.

3. Coffee provides healthy antioxidants. Coffee gives us more antioxidants compared to cocoa and green tea, which are regarded as antioxidant superstars. Scientists have found that unprocessed coffee beans contain 1000 antioxidants. Hundreds more are added when it is roasted.

Many scientists agree that coffee could very well be the main dietary source of antioxidants, which are anti-inflammatory. Inflammation is a key cause of several chronic conditions, such as atherosclerosis, arthritis, and even many cancer types. Also, you will find the important antioxidant, chlorogenic, exclusively in coffee. Chlorogenic is known to prevent cardiovascular issues.

4. Improves energy. Caffeine in coffee is a central nervous system stimulant. It can help people improve energy levels and fight fatigue. How does this work? Caffeine blocks adenosine, which is a neurotransmitter receptor. This improves the level of other neurotransmitters in your brain, which are responsible for regulating the energy levels, including dopamine.

In a study, the researchers found that caffeine reduced the fatigue level of cyclists significantly. A second study discovered that having coffee both before and during golf improved the energy level, performance, and also reduced fatigue.

5. Lowers type 2 diabetes risk. Caffeine per day may help those who are at a higher risk of developing type-2 diabetes. A detailed review was carried out on 30 studies. The scientists discovered that only a cup of coffee daily can lower the risk by 6%. This has been accounted to the ability of caffeine to support the function of the beta cells in the pancreas that produce insulin and regulate the blood sugar levels. Plus, the antioxidants in caffeine can help metabolism, fight inflammation, and insulin sensitivity, which all contribute towards type-2 diabetes.

6. Coffee helps in preventing gout. Independent research on both women and men have revealed that regular coffee consumption can reduce the risk of gout. Nurses’ Health Study examined the health habits of 90,000 female nurses over 26 years and discovered a positive relationship between reduced risk of gout and coffee consumption.

It was seen that both decaf coffee and regular coffee may help. Having 4 cups of regular coffee daily reduced the risk by 57% and anything between 1 and 3 cups brought down the risk by 22%. On the other hand, one cup of decaf coffee reduced the risk of gout by 23%. In men, the risk came down between 40 and 60 percent. These are very impressive health facts about coffee. The detailed report was published in the Arthritis & Rheumatism journal.

Are Coffee Pods Bad For Your Health

There has been a lot of discussion on whether coffee pods have a negative effect on health. The fact is that, there is no significant negative impact on your kidneys, liver, or even complexion. However, you need to drink good coffee and must also avoid too much caffeine.

The compostable/biodegradable coffee pods are the best. These pods are 100% compostable, so they will not have any negative effect on the environment or your health.

How Much Black Coffee Is Good For Health

Coffee has positive effects on heart health, liver health, and gut health. But too much of caffeine may still harm you. So, how much caffeine can you have in a day? Many experts have suggested that you can drink a maximum of six cups daily. A regular sized cup will give you 40 mg caffeine. You can select Italian coffee pods to control caffeine in a cup of coffee and make sure that it is good for health.

Black coffee, cold brew coffee, regular coffee, espresso, and instant coffee will all help. You will feel refreshed, energized, and it will improve your health too. It can even reduce the risk of heart failure according to the American Heart Association journal. There are so many reasons for drinking coffee. Just make sure that you are drinking in the right dose.

How To Become A Health And Safety Officer

What Welfare Facilities Are Required On Site