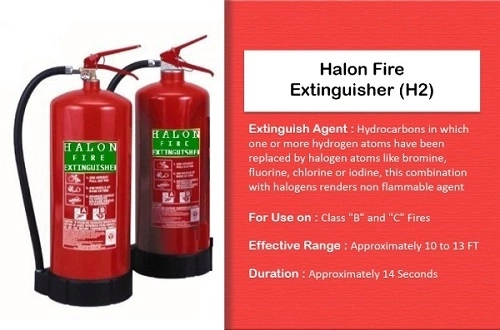 Halon fire extinguisher contains an extinguishing agent called Halon. Halon is a liquefied, compressed gas that stops the spread of fire by chemically disrupting combustion and does not leave a residue upon evaporation.

Both Halon 1211 (a liquid streaming agent) and Halon 1301 (a gaseous flooding agent) leave no residue after use after use. Halon is rated for class “B” (flammable liquids) and “C” (electrical fires), but it is also effective on class “A” (common combustibles) fires. Halon 1211 and Halon 1301 are low-toxicity, chemically stable compounds that, as long as they remain contained in cylinders, are easily recyclable.

Read Also: CO2 Fire Extinguisher: How it works and limitations

How The Halon Fire Extinguisher Works

The Halon fire extinguisher stops the spread of fire by chemically disrupting combustion.

Health effects reported in some quarters associated with Halon extinguishers includes: Asphyxiation, frostbite, burns to the skin, as well as skin and eye irritation. Inhaling halon compounds in high concentrations can cause central nervous system disorders including dizziness, unconsciousness and tingling in the arms and legs.

Exposure to halon compounds may also cause cardiac sensitization resulting in irregular heartbeats and even heart attacks (in a severe circumstances). This is because when halon is used on fires, it produces such decomposition byproducts as hydrogen chloride, hydrogen bromide and traces of free halogens.

Read Also: Fire extinguisher price based on types and sizes

Under the European Council Regulation 2037/2000, Halon portable fire extinguishers are no longer permitted for use in the European Union due to their ozone-depleting substances. Exceptions include use in civil aircraft, the armed forces and the emergency services.

Also, there is no cost-effective means of safely and effectively disposing of the Halon that has already been produced, therefore recycling and reusing the existing supply intelligently and responsibly to protect lives and property is the best solution.

Due to the regulations governing the use of halon extinguishers, CO2 extinguisher tends to be the closest Halon replacement since it offers similar protection.

Dynamic Risk Assessment – How To Carry Out