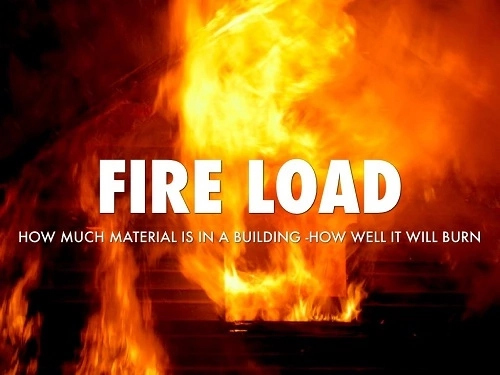 Fire load is the available flammable materials in a given area.

According to United States law, it is a number measured in kilograms-per-square meter which represents the maximum amount of combustible material that is safely stored in a compartment and the amount of heat it can generate.

It can also be defined thus: The fire load of a facility, industrial entity, process plant or building, is the the heat energy that could be released per square meter of floor area of a compartment, by the complete combustion of the contents of the unit area and any combustible parts of the unit.

It is used by fire-fighters and other fire safety professionals to determine the potential severity of a fire in a given space. It can also be used to plan for adequate fire emergency structure for any building or space; It is used for evaluating industrial safety risks.

NOTE: The more the amount of flammable materials present in a space, the higher the fire load and therefore the faster a fire will spread, increasing the potential impact of the fire.

How To Calculate Fire Load

The fire load per unit area is defined as Fire Load Density.

It is expressed thus:

Using the equation, fire load of any area can be determined.

A pilot survey on movable fire loads in residential living rooms was conducted. Questionnaires consisting of 64 questions were distributed through the Internet to collect pertinent information. The distribution of living room floor areas, window number and areas, main combustible contents, fire load and fire load density were analyzed. The mean fire load density was 600 MJ/m2with a standard deviation of 200 MJ/m2. In a project named CFMRD (Characterization of Fires in Multi-Suite Residential Dwellings), a survey was conducted on floor area and combustible contents in multi-family dwellings. A novel method was adopted. Information was obtained through the real-estate website which offered the size and photographs of main rooms. It was evaluated primarily based on this kind of information. The average fire load densities were found to be 807 MJ/m2 for kitchens; 393 MJ/m2 for dining rooms; 288 MJ/m2for basement living rooms; 534 MJ/m2 for Primary bedrooms; 594 MJ/m2for secondary bedrooms. Source

Some specifications of a building may carry a high fire loading than others. These recommendation may help reduce fire loading:

11 Common Fire Hazards in the Workplace

What Should I Do If I Need Money Now Urgently After...