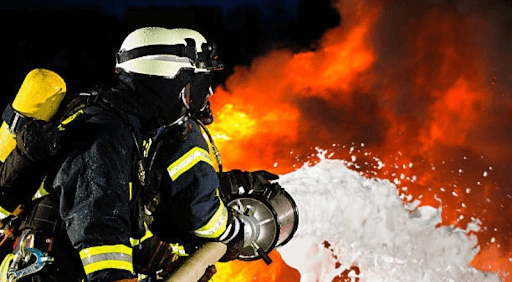 Fire Fighting Using Foam – Class B fires are those which involve flammable liquids, liquefiable solids, oils, greases, tars, oil-based paints and lacquers (i.e. flammable and combustible liquids). Combustion of these occurs entirely in the vapour phase that is present above the surface of the liquid.

Class B fire cannot be extinguished by water as it is generally much denser than liquid hydrocarbons; consequently, when applied during fire fighting, it immediately sinks below their surfaces without having any beneficial effect. In fire fighting terms, the application of water may cause the surface area of the fire to increase and spread to previously unaffected areas. Hence Foam is the preferred choice for Class B fires as it provides a visible blanket that controls and extinguishes these fires faster and more effectively than water.

However, the efficient use of foam during fire fighting depends on 3 important factors which are the foam expansion ratio, selection of foam equipment and the suitable foam chemical used. Let us understand in detail how each of these factors contribute to success

Commonly expected fire scenarios and the foam expansion ratio desirable for fire fighting are as below;

It is important to note that these above-mentioned foam expansion ratios can be obtained only by using purpose-designed foam-making branches or mechanical foam generators.

Using a conventional nozzle such as short branch, fog nozzle, or water spray nozzle, can only produce expansion ratio up to 4:1 and will lead to poor foam quality, due to insufficient agitation of the foam/air mixture. That means the foam produced from these types of equipments will have a very low expansion ratio and a very short drainage time.

So if you are using foam, make sure you have a foam branch attached to your delivery hose. Nowadays foam attachments are supplied with all kinds of modern fire fighting nozzles commonly referred to as “Foam Tips” which can be used for foam generation.

Depending upon the foam expansion required, suitable foam-making equipment needs to be used.

READ: Type Of Fire Extinguishing Agent That Should Not Be Used In A Confine Space

Protein foam concentrates are inexpensive and are usually manufactured for use at 3% or 6% concentrations. They are only intended for the production of low expansion finished foam.

AFFF is widely accepted for crash rescue fire fighting uses and on less volatile fuels such as kerosene and diesel oil. It is widely used in offshore as secondary aspirated foam for helideck protection at a concentration of 1%

Many chemicals destroy fire fighting foams either by reacting with them or by extracting the water from foam blankets. Hazmat foam concentrates have been designed to be effective on products that destroy foams by chemically reacting with them. Versions of these foam concentrates are available that have been formulated to be resistant to either extreme acidity or extreme alkalinity. They are often used to produce medium expansion foams with optimum expansion ratios of around 60: I.

If there is doubt concerning the suitability of a foam concentrate for a particular task, the manufacturer of the foam concentrate should be consulted to ensure that it can be used safely and successfully.