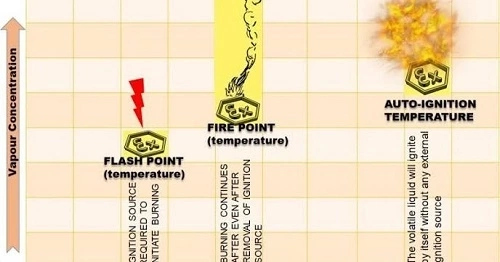 We are going to consider two parameters in this article; FLASH POINT and FIRE POINT.

These two (2) parameters have been mixed up a times. This article will point out the significant difference between the two.

Firstly, What is a flash point:

This is the lowest temperature at which vapor of a volatile combustible substance can ignite in air in the presence of an ignitable source. At flash point, more vapor may not be produced rapidly enough to sustain combustion. Hence, the fire is mostly not sustained.

Flash point is used to measure how volatile a liquid is and the level of risk it could pose.

Flash points are measured by heating a liquid to specific temperatures under controlled conditions and then applying a flame.

Flash Point Of Some Substances

What Is A Fire Point

This is the lowest temperature at which a volatile combustible substance continues to burn in air after its vapors have been ignited and the ignition source removed.

It is always higher than the flash point.

From the definitions/explanation above, two major differences can be picked between the two parameters:

How Often Should You Test Fire Alarms In The Workplace?

ABC Of Fire Extinguisher – What Does It Represent?